Another Sewage Plant is a Bad Idea for West Indy

Or Write your letters of opposition to:

Use Permit # IN0064916 in your subject line or somewhere in your letter.

Come to the Public Hearing!

This sewage plant would not serve West Indy

It would only serve the Ben Davis Conservancy District.

The proposed site for the plant is 900 S. Tibbs, about 1,000 ft from the intersection of Morris and Tibbs.

It is the nature of the business. West Indy homes and businesses would literally be flanked by sewage plants on either side.

We already have too much pollution West Indy

Our air, land, and water have taken more than the fair share of industrial burden for generations.

Neeld Ditch, where the plant would dump, is in a FEMA Floodway. The houses on the other side of the Ditch are also in the floodplain.

Property value will go down when we have 4 sewage facilities within 2 miles.

This Is Against our Quality of Life Plan

The construction of a second sewage plant in West Indianapolis boundaries – specifically anything on Chrysler land – WITHOUT NOTIFICATION – goes directly against our Quality of Life Plan.

The QoL Plan was designed and signed by WINC, West Indy residents, community partners such as WIDC, schools, churches, businesses, and Indiana Environmental Institute. The QoL was adopted by the City in 2008. The City’s Land Use Plan is supposed to consider that Quality of Life Plan when making decisions about how to use land in our neighborhood.

It’s Against the City Land Use Plan

Neeld Ditch is protected in the Land Use Plan because it is in a FEMA Floodway, and because the trees along it are some of the oldest and highest quality hardwood in the nation.

This ditch is where the sewage plant would dump its effluent (what comes out of the plant).

Sewage plants let off gases into the air that are harmful to humans. Those gases include nitrous oxide and ozone.

Nitrous oxide isn’t just acid rain – as if that’s not bad enough. Even low levels of nitrous oxide can cause fluid buildup in your lungs after just a day or two of exposure.

Nitrous oxide also creates ozone when it reacts with sunlight. Ozone can be deadly for people with asthma or other respiratory problems.

Prevailing winds would blow from the direction of one sewage plant or the other on just about any given day.

How close would the sewage plant be? Distances as the crow flies from West Indy landmarks:

Neeld Ditch is in a FEMA Floodway

There are houses on the other side of the Ditch.

Sewage plants dump raw sewage into their dumping site (in this case, Neeld Ditch) when overflows happen. If this can happen at large municipal plants with several fail-safes and trained technicians, it can happen in West Indy.

What You Can Do

Email aklein@idem.in.gov before November 10, 2022 to make your opposition official! Please include Permit #IN0064916 in your subject line.

Or you can write to:

We need every single person who is against this to take the time to submit their comment and/or attend the public hearing!

If you need any help writing or submitting your comment, please reach out to winc@westindy.org

December 2018 – BDCD’s meeting minutes from the month state $15 million cost, with treatment bill for residents to be $50.34/mo.

August 29, 2022 – Deadline for public comment. If you need any help writing or submitting your comment, please reach out to winc@westindy.org

In order to be completely transparent, we are sharing all of the documentation we have gathered about this project. We do not wish to misinform or misguide anyone about the conclusions we have come to. If you have any questions or concerns about the validity of the content here, please feel free to contact us at winc@westindy.org.

Hoosier Environmental Council is on Our Side 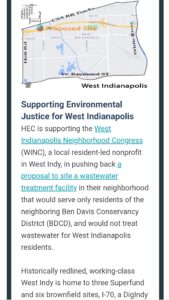 West Indy collected over 400 signatures against the rezone of 900 S. Tibbs to allow for construction of a sewage plant in a matter of days. WINC has worked to engage our city leaders from City Councilor Kristin Jones all the way up to the Mayor’s Office. We have gathered research and spoken at Metropolitan Development Commission (MDC) hearings in an attempt to stop the rezone that would permit this project. WINC and several residents attended April’s Full City Council meeting. The rezone was upheld by Council. We are now fighting to stop the issuance of the drainage permit at State level. We will keep pushing, but we also need you to let them know directly how you feel. You can still email your City Councilor Kristin.Jones@indy.gov or jared.evans@indy.gov to let them know you don’t want this, too!

There is a shortage of licensed sewage plant operators across the United States right now. BDCD plans to hire one operator who will be at the plant once a week.

Triad engineer Jim Frazell (who cites Linton – see overflow above – as one of his projects on his biography) repeatedly pointed us to the Carmel plant as an example of the type of plant that would be at 900 S. Tibbs. The Carmel plant had 9 IDEM violations within 4 months. 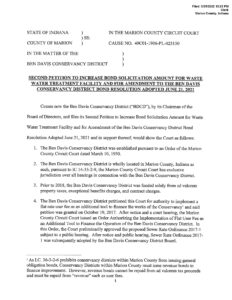 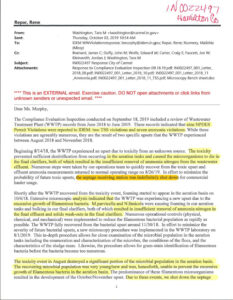 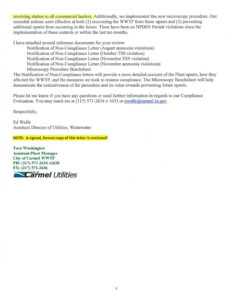 Carmel had 4 trained technicians on staff when the plant experienced a toxic episode that halted plant operations indefinitely. 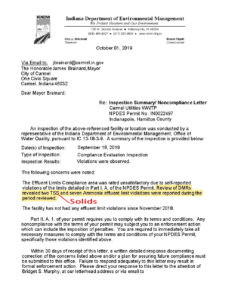 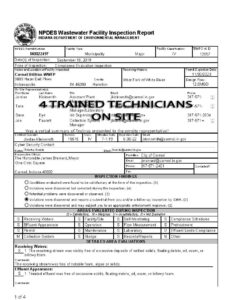 Read on to get the full story with supporting documents. Be sure to come back soon – we make updates to this page frequently.

The Conservancy knows this. Their lawyers know this. The engineering firm who designed the plant knows this. 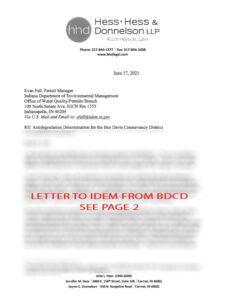 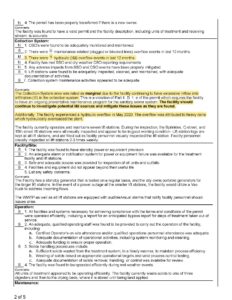 New Palestine fired Triad Associates (the engineering firm who designed the plant for the Conservancy) just this last December because their design failed two years into an upgrade promised to last 20 years. 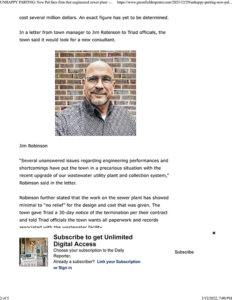 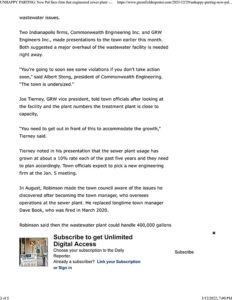 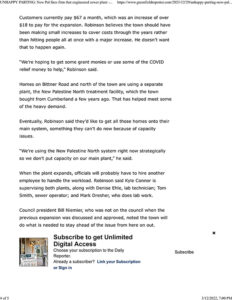 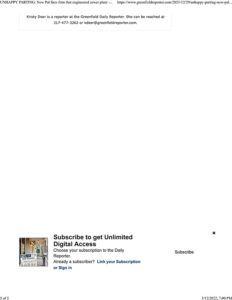 Ben Davis Conservancy District has repeatedly said the reason for this sewage plant would be to save money for their residents. Now Citizen’s has offered to acquire the Conservancy and guarantees a lower rate to residents of the district.

In 2018, Ben Davis Conservancy District told residents at a public meeting that they could build the sewage plant for $15 million and their bill would only be $50.34/mo. They have since raised that amount to $20 million, and now are seeking to make that $24 million. Is it really possible  that they can offer an affordable service when the cost of everything is increasing and supply chain issues are compounding? 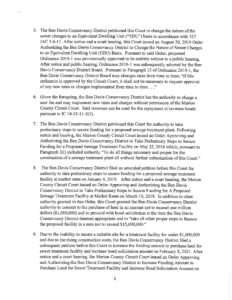 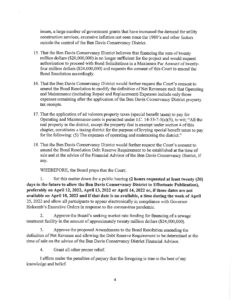 Citizen’s Has Offered a Guaranteed Lower Rate to the Conservancy

On Thursday, May 12, Ben Davis Conservancy District’s three-person Board decided to reject Citizens’ offer to purchase the District. Residents were met with disrespect when legitimately asking whether they could vote on the issue, and called liars when recounting stories of bad customer service and quoting BDCD’s own documents.

IDEM Is Curious About BDCD’s Transparency and Numbers

Indiana Department of Environmental Management (IDEM) is the agency that determines whether a person or entity can affect our environment. This is the agency BDCD had to ask for permission to construct and operate the sewage plant. This week, IDEM asked BDCD for updated financial information. BDCD was also advised in that correspondence that public comment period would be open for residents to voice their opinion when BDCD applies for the permit required to dump effluent. This will give you the chance you didn’t get before to be heard!

The Conservancy has said repeatedly that they are building this plant to escape Citizens rate hikes. But Citizen’s didn’t even buy the Belmont Plant until 2011. 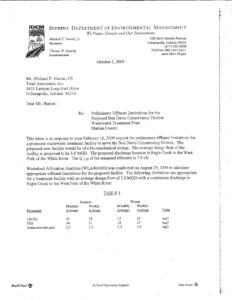